Green Cooling is sponsoring Danny Ryding, a Wigan St. Patricks amateur rugby league player, on the next stages of his development.

An exciting young rugby league player, Danny’s favoured position is in the second row and he has played for Wigan St. Pats from the age of 6.

Wigan St Patricks ARLFC is a famous amateur rugby league club with a long history stretching all the way back to 1910. Many of the club’s previous players have gone on to have glittering professional careers at Wigan Warriers, including internationals Joe Egan, Liam Farrell, Sean O’Laughlin, Josh Charnley and Sam Tomkins.

Green Cooling is proud to now fund Danny for the 2019-2020 season, helping him towards the next stage of his rugby career.

Danny has also previously represented England. Thanks to a string of strong performances in the 2017 season, he was selected to captain England U23s at a Commonwealth nines tournament in Brisbane, Australia in November last year.

He is proud of his rugby roots:

“My biggest influence growing up was my grandad and uncles, who both played for St. Pats.”

Green Cooling’s Dave Blinkhorn was delighted to be helping Danny achieve his dream of professional rugby.

“We wish Danny all the best for the future,” Dave said. “He’s a great player and we hope to see him in an England shirt again soon!” 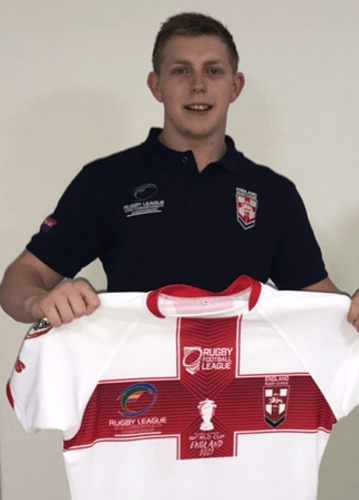 < Back to Media & News
We use cookies on our website to give you the most relevant experience by remembering your preferences and repeat visits. By clicking “Accept All”, you consent to the use of ALL the cookies. However, you may visit "Cookie Settings" to provide a controlled consent.
Cookie SettingsAccept All
Manage consent