Lancashire based commercial and industrial cooling and refrigeration specialist GreenCooling has scooped the prestigious Excellence in Food Service Award at the RAC Cooling Industry Awards ceremony held at the London Hilton, Park Lane on Wednesday 23rd of September.

The award was won following the submission of detailed technical information and a case studied around the innovative, practical & proven Twin Energy CO2 unit.

Now in its 11th year, the industry’s biggest and most-respected Awards event, the RAC Cooling Industry Awards, champions the leading innovations and environmental successes in the refrigeration and air conditioning industry and is attended by over 500 of the industry’s key players cheering on winners and finalists. The awards bring together the whole industry – including end-users, clients, manufacturers, designers, distributors, consultants, contractors and service companies – to celebrate the best advances being made.

All of the winners were announced at a spectacular evening at the prestigious London Hilton, Park Lane on 23 September. The Cooling Industry Awards were launched by RAC magazine in 2004 with the backing of major high street end users and leading industry players. The first awards ceremony took place in September of that year to great acclaim. Over the last 11 years, the awards have become the symbol for successful and environmentally friendly cooling in both the industry and wider public arena. 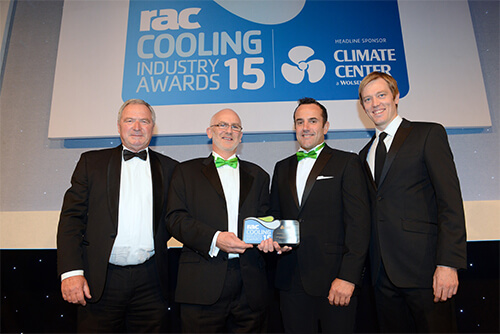 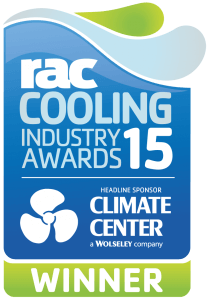 The awards provide a national focus to recognise, reward and celebrate the achievements of those pushing the boundaries of environmentally focused refrigeration and air conditioning culminating in a gala evening celebrating the winners and finalists.

The Twin Energy system is an innovative system to capture the heat produced by demanding refrigeration systems and use this heat energy to provide heating and hot water elsewhere in the business thus substantially reducing the overall energy demands and carbon emissions in the process.

The Twin Energy system based around a highly efficient CO2 system that has the potential to operate across a wide temperature range from 5°C to -20°C in cooling mode and 20°C to 80°C in heating mode with 100% heat recycling. However despite being completely self-contained the Twin Energy unit requires a complete integrated system in order to deliver benefits to the food service sector where the delivery of cooling to highly demanding cold rooms, kitchen and display refrigeration is the main priority along with integrating the high temperature recycled heat in order to achieve the maximum level of cost and carbon savings.

Gary Broadbent Director at GreenCooling said “we are delighted to have won this prestigious award in such a competitive category and we are equally delighted the food service industry is recognising the commercial benefits of effective heat recovery. With energy costs only going one way, this technology is going to become key if businesses want to stay competitive”

< Back to Media & News
We use cookies on our website to give you the most relevant experience by remembering your preferences and repeat visits. By clicking “Accept All”, you consent to the use of ALL the cookies. However, you may visit "Cookie Settings" to provide a controlled consent.
Cookie SettingsAccept All
Manage consent